90 replies to this topic

If Biden does not, the Democrats will lose more than the 2020 race for the Oval Office. So, its either Biden, or bust, because no one in their right mind would seriously want the self-demonizing likes of Sanders, Warren, Harris and the rest of that ilk to become president.

I'm pretty sure I'd vote for a turnip before I vote GOP now. If Andrew Yang makes it I'd vote for him. If Bernie doesn't have a heart attack and die I'd vote for him. Warren has my vote. I wouldn't even vote GOP for county dog catcher. Until we see some sort of change or shift in the GOP that's not licking and panting for crazy I will take whatever the left sends me. Because they're sounding more and more normal compared to the GOP.

I've got a preference list for sure, and I've mostly decided who I'm voting for in the primary, but I can't see myself not voting democrat no matter who it is

'They've been trying to impeach Trump since before he was sworn in. If they had the goods they would have begun impeachment hearings instead of this inquiry.'

Yes, they have. So? As for 'impeachment hearings instead of this inquiry' , they're just following procedure-witness testimony before hearings. It appears to me that you want to skip the arraignment process, go directly to trial, skip that, and get a dismissal. That's not how it works. The fact that they're getting testimony lined up before the hearing is not indicative of lack of evidence.

Our President made a couple phone calls to a foreign government and asked them to investigate a private citizen who is running against him. That alone is impeachable and is a textbook example of why impeachment exists. Trump not only admitted he did this-twice-in public, on video but Mulvaney admitted it to the Press and said they do it 'all the time'. The only questions that linger are whether or not Trump wants Biden investigated only because he's a political rival and the reason he held the financial aid back. But even if those weren't loose ends, he committed an impeachable offense twice and admitted to it.

An inquiry is not needed to call for an official impeachment.

The GOP defense is: okay, so what?! what about how Obama handled Ukraine? what about all the Russian propaganda talking points we know are false, but will tout anyway?! who is the whistleblower, even though we know everything the whistleblower reported is confirmed via these witnesses?

For this scandal alone Trump should be impeached and removed (prior to this he has ten counts of obstruction levied against him via Mueller). Trump likely wont be removed because our nation is more broken than anyone previously wanted to admit. 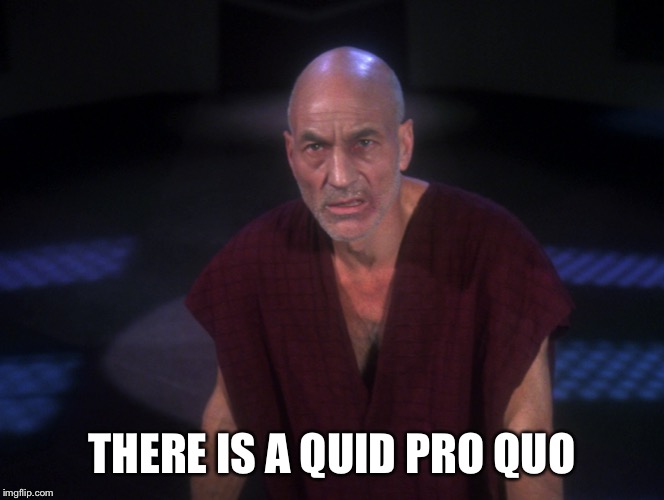 LOL. You're all so jaded.

Anyway.  It's pretty clear to me that Trump withheld security aid, counter to our national security interests, for the purpose of pressuring Ukraine for political dirt.

You might not think that's enough to build the political will for impeachment and removal from office, but I would argue that it should be.

It definitely should be. But people stick to tribal lines and don't waver. It's very unfortunate.

That it's not only conceivable, but highly likely, that Trump will still get reelected despite the clear crimes committed (on top of all the other daily evidence of his unfitness for office) is one of the great mysteries for we non-Americans.

Honestly, its a great mystery for a lot of Americans, too.

YES. I think this 'our nation is more broken than anyone previously wanted to admit.' but for me, not more than I wanted to admit, more than I had ever imagined. MUCH more. I thought the people of WalMart stayed IN WalMart. Now I see they're outside, walking around like real people and voting and ****.

The GOP clearly knows the American tolerance and attention span and are counting on it. We need to be marching in the streets until we get rid of this, daily.

I work for the federal government these days, and it boggles my mind how out of the loop that even people here are on the process of this whole thing.

The government almost shut down last week when funding would have lapsed, but an emergency Continuing Resolution stop-gap bill funded everything for thirty more days.  We had some conversations in meetings about how the impeachment hearings were probably affecting the CR.

I mentioned that even though the Senate likely wouldn't convict, I thought it was kind of inevitable that he'd be impeached in the House.  Literally most of the room thought that impeachment meant immediate removal from office.  Not just the start of the Senate trial.

These types of misunderstandings about impeachment and the process appear to be rampant, among average citizens and our representative citizens.

My mom still swears that Bill Clinton wasnt impeached, even after I explained he was and then acquitted.

The example for the representative citizen misunderstanding is Matt Gaetz and everyone that insists the President has been stripped of due process in the House.

I can understand misunderstandings in some more complex stuff in government.  It's tough to keep track of all of the subcomittees and what they do for example.

But I feel like people should have a basic understanding of some of the essential frameworks written in the Constitution.  I remember years ago explaining to a family member that they didn't actually vote for a President, and instead voted for an elector in the electoral college.  Their expression when I showed them proof was probably the same one as if tentacles burst out of my head.

When the GOP held Senate exonerates the charges will the GOP stop holding a grudge for losing against the Clintons and finally move on?

You do realize it was a Republican Senate that let Clinton off the hook?

Thats technically true, however the reality is muddy. The vote was mostly along party lines with only five GOP senators swinging not guilty for both charges.

You do realize it was a Republican Senate that let Clinton off the hook?

Oh yes indeed. But it seems like there's some sort of grudge match that still makes the Clintons continue instead of just letting them shuffle off and go out of the limelight.

No grudge match, just Hillary being bitter that she didn't get to be president.

Right. I was kind of hoping once Trump is out can we just move on? Or will there be more stupid. Pretty sure more stupid.

As long as there are Trumps or Clintons alive, they'll keep at it.

So are the Republicans right? Did the Democrats not prove that Trump did treasonous activities? I dunno. I feel like there's a lot of not cool stuff that's sliding under the mat because people are willing to give Trump the benefit of the doubt or something.

There wasn't an obvious sure fire knock out punch. There wasn't a smoking gun covered in his fingerprints and a bullet that perfectly matches the ballistics. But it's more than enough that if it had been a Democratic president and a GOP House, they'd be calling the president Satan personified.

But there IS; that's what's so mind-blowing. Trump released a phone call in which he said-audibly-"I need you to do a favor, though" and then stood in front of TV cameras and said he did it. Then, he did it again, in front of TV cameras. THEN, Mulvaney said "yeah, we did it. We do it all the time, get over it!" How is this not 3 smoking guns covered in his fingerprints, hair samples and sperm with a giant, neon arrow pointing at the dead badger that he perches on his head each morning?

Right? And then the GOP comes out with it's 360 page thing saying it is all lies. And Trump won't come defend himself or show up meanwhile when it was in the House they were crying about not being represented. It's like trying to reason with the weird kid with aspergers or something. The thing about the Ukraine hacking our elections is FANTASTIC. It's like the GOP embraced all the crazy it could and snuggled up to it and can't imagine how it will live without it like a battered wife. The only thing is I don't feel sorry for them like I do women who are actual battered wives.

The Trumpets are just continuing their gaslighting of the country. We are all in a battle over reality, fueled as it always seems by ignorance, and this time the Trumpets have decided to insert their own and have the wherewithal to do it. Liberals do it to, of course, it seems cyclical. As completely played out as it is to say, that doesnt change that we are basically living a version of 1984. These are the exact times when everything can break if our representives cant agree on where the line is or what a line even is.

Afterthought: There are people that could possibly provide a means for bipartisan resolution of this inquiry, whether resulting in impeachment and removal or censure etc. Those people, however, are not testifying. Those people being, but not limited to, Bolton and Pompeo. I get their desire to not testify unless compelled, and I totally get we as free citizens have a manner of choice here, and I also understand there is legal authority being disputed, but at some point very soon someone has to decide which master they serve and then deal with the consequences. And that conundrum probably has to be extrapolated out to everyone in regards to party lines and the country.