Alright, who else here is voting for THE DONALD?

403 replies to this topic

A moderate Republican (ala Bush I) would be a nominee I could really get behind.  Then it hit me...there is a moderate Republican on the ticket... Hillary Clinton.  She is pro-big business/ Wall Street, supports fracking, fairly hawkish, and is liberal on social issues.

I dislike Trump as much as I dislike Hilary personally if not more. But I think he's got it mostly right on many of the issues, or at least those I think are most important.

Healthcare: Trump wants to repeal Obamacare and it should be. For professional reasons, I've had to attend continuing education seminars where this issue constantly comes up. Obamacare's "savings" were front loaded, and projected savings are expected to shrink while costs to insurers rise, with premiums to follow. Also many (all?) state-funded insurers (welfare) no longer bear the full burden of the costs. The federal government pays for a portion of the cost, the state picks up the rest. Guess what fund that federal tax money comes from? Medicare. So, your sweet grandparents and welfare losers are competing for resources out of the same fund. This needs to be fixed, and the first step is to stop the bleeding. As is, Obamacare needs to be repealed.

Clinton, in addition to letting illegal immigrants flood the job market, wants to put them through college for free, as well as keep Obamacare coverage. This country already came close to defaulting on it's debt. Does she want to finish the job? Vote for her and find out! I'd bet you a thousand bucks, because I would have already moved to Paris, where my money won't be devalued to worthless due to hyper-inflation.

Guns: Trump's way off here (like all republicans). I believe in the second amendment, but not because I think guns are important, but rather I think ammendments are important. This one is outdated however. There was a time when perhaps being armed would protect against government tyranny (and native American tribes). it's no longer applicable. Owning a flintlock musket isn't going to protect you when now there are government agencies that can not only arrange a tragic accident upon you, but can erase your very existence. Hunting rifles and home defense pistols only. No assault rifles. No hand grenades. No bazookas. Unless you're in the military you don't need these. Yes background checks. Yes protected health information (screw HIPAA). No crazies. Give them a complete medical dossier if it prevents a psycho from getting a pea shooter. Guns must be in the hands of the right people.

Military: Parts of this world we live in ****ing scares me. Do we need military bases and soldiers stationed all around the world? Well I don't want to say no and be wrong. let's not pay them crap either. If someone is getting paid to keep my ass alive, I don't want that person to be disgruntled. I'm more or less aligned with Trump, but I think he might love nukes too much. Nobody should ever use them anywhere ever. If our arsenal is thirty-years old then good; they don't NEED to work, they just need to give others pause so they won't use THEIRS. This means don't fricking tell the world they are old and we need to replace them! Shame on you Trump! Way to show your cards.

Social issues: I'm indifferent. The above issues are way more important. If this were the '90s and our country had a surplus, and were (perhaps) safer on a global scale, then social issues would carry more weight than none at all.

In summary: it all boils down to classic republicans versus classic democratic ideologies (no surprises); republican being more important right now.

Carrie Matheson: So yes, I can roll with Trump. If it's Trump vs. Clinton, I WILL vote for Trump. I might change my mind, but i probably won't. Not unless there is a democrat (or anybody for that matter) that's hard on illegal immigration, repealling Obamacare, hates guns and won't shrink the military. As far as I'm aware, THAT candidate isn't running. But then again, the best person for the job is never a candidate. Trump will have to do I suppose.

Actually, I am a rocket scientist

My only reason for saying I'd only vote GOP if Obama ran a 3rd time is because of term limits.

But yes, I agree with Chalup that Hilary is essentially Obama all over again (and Ender's comment that she's pretty much a liberal/moderate Republican). That said, I think we all know I'm not the biggest fan considering how he dismantled the manned space program and basically put what I consider my second hometown into a Depression, after claiming he would support the space program on the campaign trail. Hilary at least has outright admitted she prefers unmanned exploration.

One step closer, time to accept it folks!

It's not too late to get on this train to Make America Great Again.

Trump is a freakishly natural politician and I admire any public figure who doesn't poll test each and every word before it comes out of their mouth, but seriously: **** that guy.

AND he has baby hands

Trump is a freakishly natural politician and I admire any public figure who doesn't poll test each and every word before it comes out of their mouth, but seriously: **** that guy.

You sound a little angrier about Trump than you did a couple months ago.

It's not Trump himself so much as the reactions he engenders are exhausting me. I literally woke up to text messages from two friends who are crawling out of their skin terrified because Trump won in NH. As much as people hated Bush, I've never experienced this level of alarm.

So while I dislike Trump personally, I thought the reactions provide me with reliable entertainment. But now that everybody I know only wants to talk about the evil forces aligning against St. Bernie (who is also ridiculous in his own way) and how terrible Trump is 24/7, I'm like... just make it end. Please. But of course, the Carnival of Chaos is only beginning.

But that's the best part!

There is no better part of my day than waking up and seeing the pure panic.

OK, now I'm in a better mood. I've seen this reposted about 100 times since yesterday, and the people who should know better pretending this is "high art as political statement" and the contortions they go through to justify it when others call them on it cracks me up.

Personally, I think it's kind of hilarious, as it works on two levels. On level one, Trump -- at least according to legend -- has a serious issues about his "stubby fingers" and with body image in general, to the point of harassing people years after the fact who have made comments about his appearance. Level two is of course the complete and utter hypocrisy of so many of the people who are sharing --- and then justifying the image -- as "important, politically charged artistic expression," when I know for a fact a lot of these same people would absolutely lose their **** if somebody made similar "art" lampooning one of their political heroes (OMG can you imagine if the same artist drew Elizabeth Warren?)...

Yeah, that's pretty bad.  At least we didn't have to see the Hillary version.

I have. And I am in therapy now.

Yeah, that's pretty bad.  At least we didn't have to see the Hillary version.

I have. And I am in therapy now.

Yeah, and I claim credit for sending Pong into spastic fits, and making him rock himself in the fetal position in a corner for hours.  That was my revenge for yesterday...and my pleasure. **** I shouldn't have opened that at work

I'd hit it.
Also-- slightly of topic... for the record, I'd legit buy a GW painting if they were reasonably priced.

Honestly, I don't know which image would inspire barf more--this Trump painting with his party popper exposed, or imagining a Hillary painting, with--what must be--her 70 year old cabbage leaves dragging on the ground.

I know people have always liked making fun of Hillary Clinton's appearance, but in all honesty have never found her repulsive. Now Trump, on the other hand...

Chalupa's image, it's more about the trailer trash trappings and soulless eyes than the sagging bewbs.

Or maybe that's just a long-winded way of saying "I'd hit it, too."

It doesn't really matter what she actually looks like--if you don't like a woman, you insult her appearance. It's what we do.

I think Trump is getting oranger. Every time I see him he's gotten this orange tone.

And Pong, I find Trump way more palatable than Cruz. If we elect Cruz I'd be scared for America. Trump is not as scary.

There can be only one

To get your mind off the horrifying images of Trump and Hillary, I present to you what politicians and their wives look like in Canada: 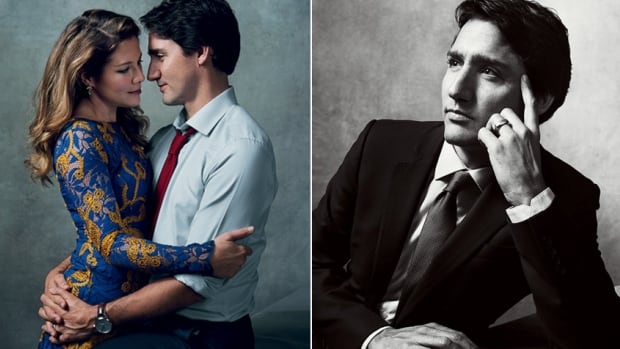 ^ Not Hillary Clinton.  Not Donald Trump

We also have free health care, and Tim Horton's coffee.  Check us out sometime.

^people actually voted for that guy simply cause he is good looking. People couldn't stop talking bout it when I was in Montreal. I wonder if he's any good?


Also, that trump painting is way better than the Hillary one. And he's giving it some sass too. Like "yeah what? I'm orange. I got a micro ****. What? Whatcha gonna do? Get the baby-oil sugar-tits let's have a slip n' slide" or at least that's what I gather he's thinking.