The Flash on CW

238 replies to this topic

...is now getting its own pilot, instead of via Arrow: http://m.superherohy...aditional-pilot

A great sign, and I see no reason why this wouldn't take off just as much as (if not more than) Arrow.

With the right cast a Flash series could really hit the ground running.

I'm still bitter about the Aquaman pilot not getting picked up. It was, IMO, better than Smallville and Arrow combined.

‘The Flash’: First Photo of Grant Gustin in Flash Costume

The first photo of Grant Gustin in the Flash costume in the CW’s “The Flash” pilot has been released. While the image doesn’t actually show him moving, it does show the detail work involved in designer Colleen Atwood’s costume (The Oscar winner also designed the costumes for counterpart program “Arrow”).

Production begins on “The Flash” pilot next week. It’s produced by Bonanza Productions in association with Berlanti Productions and Warner Bros. Television and is based on characters published by DC Comics. Joining Gustin in the cast are Jesse L. Martin, Carlos Valdes, Candice Patton and John Wesley Shipp, who played Barry Allen, the Flash’s alter ego, in the 1990s live-action CBS program.

Saw this on CBR this morning. Really, really like it. Hopefully the rest of the suit looks as good and that this means they'll be using it (and the name Flash) right away, unlike what they did with Arrow.

That looks pretty not bad.

I totally love the design. I think the color is horrid. If the media in Smallville called Clark the Red/Blue Blur then I can only imagine this Flash will be called Skid Marks.

What's wrong with the color? It's a deeper red than the comics, but I think that's probably a good call for live action. Love how they solved the lightning bolt problem. Again, what works on paper does not always work well live...

Afterthought: And the color red works fine in live action. Let's not be ridiculous like red can't work on film.

Afterthought Two: are you trying to say that 90s Flash doesn't work? That design looks good, just like this new one looks good. That design was too bulky, too sculpted, and the show was boring, but overall it looks good. Same with what we see of this new one. This new one is just the wrong color. Red, people. The Scarlet Speedster. Not leather brown. On my phone it's brown, on my compy it's brown. My kids say it's brown, my wife says it's brown. I'm not color blind. I wondered. No. It's **** brown.

It might look brighter and more scarlet in the actual show. It could be the lighting or the filter they're using for this particular photo. Anyway, I approve... so far. I'm eager to see the rest of the costume, though.

By the way, I loved the 90s series. I'm actually pretty excited that John Wesley Shipp has joined the cast. I'm crossing my fingers that he's playing Jay Garrick. That would be neat.

OK, first, I can see why you might think it's brown, but I'm fairly certain that's due to the dim lighting. It looks like a deep red to me upon close inspection of the best lit parts. The folks at CBR agree: "Though the photo only shows Gustin's head, what's revealed certainly appears to be a faithful adaptation of the character's recognizable and enduring appearance, albeit a darker shade of red than most comic book portrayals."

After your afterthought, I realized that I never said bright red couldn't work. Simply that a deeper red might work better, which in this case, would mean "less comic-book, more reality based". Arrow is meant to be a "grittier" tale on the books and this show is set in the same universe.

As for the 90's TV version, I am absolutely saying no, the lightning bolts on the headpiece do not work. They look goofy and impractical. In keeping with the comic books, but not something I am fond of looking at on the small screen. The overdone, sculpted fake muscles are, as you pointed out, also a problem. So, between those two things, it already "doesn't work" very well. Now that I look at the picture again, the chest symbol looks glued on and doesn't thrill me, either. Hey, but at least it's bright red.

Actually, when I first looked at the picture, my initial impression of the costume was that in terms of color & material, it reminded me a bit of the costume in this movie... 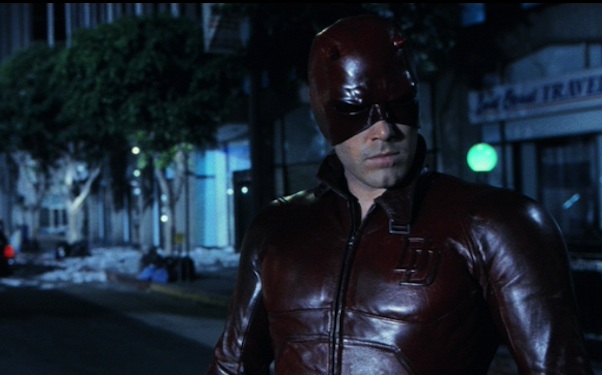 ...which certainly looked more red in lighter shots than in dark. Also, life-long Marvel guy that I am, I'm still fairly certain I already like this show better than that movie.

DareDevil wasn't that horrible, it's superior to the X-Men films. Fun thing about the red issue with that film however is that in at least one scene the DareDevil costume isn't red at all, it's totally black. Studio Execs were all over that film, like most I imagine, but all over it none-the-less. The director had to fight just to get a costume. When the Suits finally let DareDevil have a costume (the Suits originally wanted "a guy in jeans that fought crime") the Suits insisted it couldn't be red, had to be black because that's badass. So they make the suit, it's black and that's going to be that. Then the Suits see the dailies and start ****ting themselves over it looking like a Batman ripoff, so they demand it gets changed to red. The stuff that was already shot then got colored in post.

So, I guess that makes it a touch ironic, then, that Daredevil is the next Batman, eh? Have to say, that thought doesn't inspire me with much hope for that movie, either, btw. Especially as I was bored stiff through most of Man of Steel. I can only hope that Wonder Woman turns out well, so I can actually care about one of the heroes.

Yes, Torch, yes - Daredevil was really that horrible. I'm happy for you that you actually got some enjoyment out of it (while being utterly perplexed how you could think it was better than the X-Men films). Personally, though, I barely made it through. I even made myself give it another chance, just to be fair (and didn't make it through, the second time). In comparison, I also hated the first Wolverine movie the first time, but rather enjoyed it (with some minor quibbles) when I made myself watch it a second time. And I also preferred the Electra solo movie the only time I watched it over either time I watched Daredevil.

Anywho, getting back to Flash: what did we think of Barry Allen's debut on Arrow? Not being a huge DC fan, I'm not exactly an expert on Flash's counterpart. I came away without much of an impression, honestly. I didn't dislike him by any means, but I wasn't exactly blown away, either. (All I know for certain is that I can't blame him for being into Felicity, 'cause...well, she's hawt!)

To each their own. :-) I couldn't finish Electra or Wolvie Origins.

As for Flash, I think what DC is trying to do is great. I hope it works. I haven't seen the episode, but I saw a clip where Oliver meets Barry. The actor, while not physically holding a resemblance, makes me think of Sean Hayes. Same tone, cadence, moves similar. "Flash Hands" instead of Just Jack's Jazz Hands. ;-) But sometimes it takes a bit for an actor to get a feel for a character, or even a show deciding what to do with it. eg. Picard was a total dick for almost two seasons on TNG. Heck in Arrow our intrepid hero was the Punisher for the first season so.

To each their own. :-) I couldn't finish Electra or Wolvie Origins.

I think that, in both cases, expectations were key. I wasn't blown away by Electra, not even close, but (after hating Daredevil) I expected it to be horrible. I thought it OK. Origins: Wolverine, on the other hand, I was really excited about and then terribly disappointed. It took me a long time to re-watch it, but when I finally did recently, I found that the parts that truly bothered me were few and fairly minor. The first time around, I think I let those those negatives distract me too much from the movie's positives (which do exist, I believe).

I think that parts of Origins are rad, it was like X-Men: Highlander. Once the history stuff stopped I lost interest.

Origins is the only case I can think of where the video game adaptation surpassed the film.

What about Goldeneye, Aliens Vs Predator, and Enter the Matrix?

Never played AvP, I think that Goldeneye the game is great, but not better than the movie and what I remember of Enter the Matrix was game ending glitches. Maybe it was the copy I played, but it was bad.

Here's our first look at the full Flash costume!

I like it! I'd like the red to be a little more vibrant, but it's not a dealbreaker for me.

It definitely appears to be red now. The first tease looked brown. I too prefer primary red, but this version looks good.

Here are some candid photos of the costume and Grant Gustin in action as The Flash.

Those candid photos. Ugh. It is a brown, it's sienna. That other shot with it looking more blood red must have been manipulated. Worse thing is they have primary red in the Flash symbol on his chest. Why not just be red?! Good lawd.

Also tagged with one or more of these keywords: dc, arrow, flash, cw