43 replies to this topic 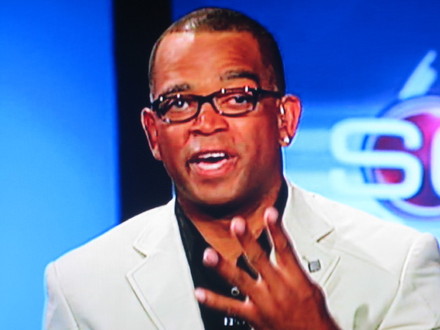 I'm Stuart Scott, yo! Tune in today at 6pm Eastern for live coverage of the 2012 NFF Supplemental Draft and maybe, just maybe, you'll get a chance to see me desperately try and convince people I'm still hip, even though I'm really pushing the big 5-0. Check it out: see, that's 1, 2, 3, 4 fingers I'm holding up. Four. That's exactly half of eight - as in ESPN8, The Ocho. The one network I can't seem to get onto, no matter how damn smooth I try to be.

They did let me do this promo piece, though, so maybe things are looking up. Make sure you look up ESPN8...at 6!

"Eh, just a slight delay to getting these proceedings kicked off, as the Irish Micks feverishly work their twelve hour clock. This first pick in the inaugural NFF Supplemental Draft is a historic one, so they no doubt want to make sure they get it just right.

Welcome back to this live coverage on The Ocho. I'm Chris Berman, along with my long time partner, Tom Jackson. We'll be joined by our usual cast of thousands as things roll along here. Right now, we'll take a short commercial break and see if we can't rouse Micks owner Sean Crowley from his drunken stupor..."

Daily, nightly, and ever so rightly.

Please move QB Brandon Weeden from my rookie squad to Ash's. Since I now have a spot open, anyway if I can get back into the draft? If not, totally cool.

Please move QB Brandon Weeden from my rookie squad to Ash's. Since I now have a spot open, anyway if I can get back into the draft? If not, totally cool.

I would not think so.

Daily, nightly, and ever so rightly.

No worries on my part. His pick wasn't passed and he has an empty spot in his roster.

Rock will pick after Ash, before Ex

I really would not think so. The draft order was set prior to their trade. When someone trades a keeper they dont get another pick in the draft, why would that happen in this case?

Same thing here. It's not really that Rock wasn't entitled to any picks, it's simply that he had no room on his roster and wasn't going to be able to use them.

Or like the case in 2010's draft when Garrison took someone in an early round and like 2 days later he had a season ending injury. So we just reinstated one of the later picks that was crossed off because Garr wasn't going to use it because he had filled his roster.

With the 5th pick in the inaugural...and in all likelihood only...NFF Supplemental Draft, the Nightmares select...

Dex is on the clock. He was supposed to give his list to somebody...

Or like the case in 2010's draft when Garrison took someone in an early round and like 2 days later he had a season ending injury. So we just reinstated one of the later picks that was crossed off because Garr wasn't going to use it because he had filled his roster.

No. The circumstances are not analogous at all. You never had the pick in this draft, therefore there Is nothing to be reinstated

Dex is on the clock. He was supposed to give his list to somebody...

Just skip me, I'm not going to have time.

To be clear, Dex: are you saying to just skip you for now & you'll jump in and make your pick later or are you pulling out of the draft altogether?

Wait rock gets a pick now? Are these picks traceable? During discussion for the trade I wanted to trade sup pick but it was stated he got no supplemental pick... hmm lodge complaint or not...

And since I appear to be up according to the db message I got while typing this. I will have it in within an hour unless Josh gordon WR browns is available

Josh Gordon is all yours, Ash.


These picks cannot be traded. However, Rock did not trade a pick - he traded a player, which is allowed. He was not awarded a pick. Once again, the draft order for this draft follows the odd rounds of the regular draft. The reason you didn't see the Heels, 'Roos, or Ponies on the draft board is simply that since they did not have any open spots on their practice squads, they were not going to be able to use any picks in this draft. Just like in the regular draft, when a team's roster is full, those picks were going to be skipped. Now that he has an open spot, however, he will not be skipped in the first round. After that, his squad will be full and he won't be able to participate in the other rounds.

You can lodge a complaint if you want. However, since Lucas and I didn't agree on how to handle this situation, it was already bumped up to the commissioner and he gave a ruling on it. You can PM Irish, obviously, but I'd rather not clutter up the draft thread arguing about it.

"There will be a Supplemental Rookie Draft. This draft will be two rounds, the order will be determined by strict worst to first order, it will not be serpentine. Any owner with Practice Squad spots remaining will participate."

1) We need to cut two rounds out of this.

2) Rock had no practice squad spots remaining. Therefore he was not participating in the draft, therefore he has no pick to be reinstated.

I don't care what's decided but that's why I'm saying what I'm saying.

Sorry, let me say it was all in jest, sort of. I'm sure at the time we decided to do this we couldn't think of everything. Rock knows what my other pick would have been had I gotten it. So I am good with how this is. We at least know what needs to be discussed sooner rather than later.

Back to Sports Archive

Also tagged with one or more of these keywords: NFF