Laugh if you want, but I think Neil Patrick Harris would be a good Flash.

Edit: weird. I had assumed that NPH already had played Flash at some point, possibly in the JL:U cartoon series. I suppose because the actor who had voiced him before sounds so much like him already. But after doing some Googling, it turns out that he hasn't before, but will in a direct to DVD animated movie out early next year. So apparently, someone up top was already thinking of him for the role before I was.

What do y'all think?

John Stewart is boring. Hal Jordan should be THE Green Lantern for the movies. He's the best GL, without a doubt. He's a freakin' fearless jet pilot. What's John Stewart? A fearless...architect? Please. Hal is more recognizable, anyway. Plus, he's the current main GL in the comics again. All signs point to Hal. Save John Stewart for a supporting role to Hal in a standalone GL movie. If you want to make the movie more culturally diverse, put in Victor Stone (a.k.a. Cyborg). He's a much better character than John Stewart.

Not all of these characters even have to appear in the movie, mind you. I'm just throwing some names in for alternatives.

I concur with both of your choices for GL and GA. I'd never have thought of Owen Wilson as Oliver Queen, but since you mention it, I could totally see that.

Neil Patrick Harris would suckass as the Flash... in live action... in this new JL: New Frontier animated film it might work.

The voice of the Flash in Justice League and JLU cartoons was Michael Rosenbaum aka Lex Luthor from Smallville. Rosenbaum, had he not been Lex Luthor, could have been a pretty decent Flash in a live action film.

As many have suggested, Ryan Reynolds aka Van Wilder is rumored to be running for the role of Flash in a live action film... which could work.

Catherine Zeta-Jones is quite literally the top looking pick, with Xena, for a Wonder Woman although I don't think either will ever suit up for the part. Recently Kate Beckinsale said she turned down the role, she is said to be considering Catwoman instead. Beckinsale could have been decent in the role. As for all the other actresses that are floated (chicks from Buffy the Vampire Slayer and Heroes and all the rest I've heard)... no. I don't think any of them could do it.

Back in the day Hal Jordon and Oliver Queen could been played decently by the cast of Tron, Bruce Boxleitner and Jeff Bridges.

Green Lantern (Jon Stewart) should be handed over to Djimon Hounsou before Marvel snaps him up for Black Panther.

Had he not ever been Superman on TV... Dean Cain would be perfect for Captain Marvel. In all honesty he's always been more perfect for that than Superman.

So in my fantasy casting: Only the "big 5" for the film... otherwise it just seems to be too crowded.

Looks like our guess in regards to The Flash is one more step closer to becoming reality.

To see Routh and Bale together would be incredible. Hopefully they'll both be involved in the film. I'm in the "Ryan Reynolds as the Flash" camp too. He has the physique and wit of Wally West...provided WW is the Flash they decide to go with. I see some people here calling for John Stewart to be GL in the film but to me Hal Jordan will always be the man. If this film happens hopefully it'll FINALLY lead to a Green Lantern film. That's one character LONG overdue for a movie.

It's funny-- in comics I always tired of yet more and more villains who had the physical capacity to fight Superman-- which of course culminated in Doomsday, which I always thought was a stupid gimmick. I always preferred those villains that could out-wit superman, which Luthor was the best of.

And yet in a movie, I actually find myself agreeing in that that special effects and action might be served with Supes in a toe to toe brawl with somebody.. hence my repeated suggestion of having Braniac or Luthor hatching a scheme, and contriving Bizzarro to physically deal with Superman.

Or just Brainiac would suit me.

It would potentially be very awesome to see Superman fight a mindless monster like Bizarro or Doomsday on film.

Bizzaro is too campy. I'd rather see Doomsday.

I would like to see the Eradicator\Superman. He was choice. Probably the most interesting non-reboot superman villain supes had. 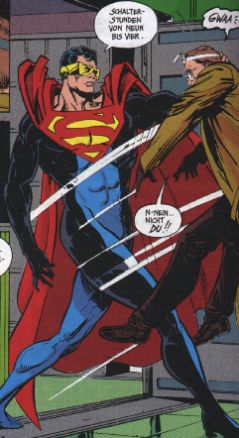 Here is my idea for a Doomsday\Reign of the supermen movie storyline:

Movie 1 (second Routh movie) Doomsday discovered by Lex Luthor, and unleashed. Doomsday VS supes, both die at the end

Movie 2 (third Routh movie) -reign of the supermen- Eradicator, Cyborg Superman, superboy (superman and Lois's son), but no Steel (Shaq demonstrated how lame that would be). Supes returns at the end of the movie in a power suit. Subdues eradicator, and temporarily beats Cyborg.

Movie 3 (forth Routh movie) Instead of the Warworld story arc, Cyborg is turns out to be working for Braniac. A weakend Supes, teams up with Eradicator, and his son to take on Braniac.

Wow. I just did a search and found this. Looks like he's actually being considered. Who knew? If he were presented with the right script approach and was made to understand what makes the character so special, I think he might do it.

I'd pick Adam Baldwin over Fillion for Hal Jordan.

I'd pick Adam Baldwin over Fillion for Hal Jordan.

Baldwin? Not the right look...Fillion is no dead ringer for any artist's version of Jordan, but I would find him a better visual fit over Baldwin.

What's wrong with his look? Both Baldwin and Jordan are fairly square-jawed and not slightly-built.

Bizzaro is too campy.

Not necessarily. If done a certain way, Bizarro can come off as a super-powered, tragic Frankenstein-like figure. Just jettison the square-shaped "Bizarro World" concept and go with the failed Superman clone origin.

What do y'all think?

John Stewart is boring. Hal Jordan should be THE Green Lantern for the movies. He's the best GL, without a doubt.

No, he isn't. Hal's boring, too. It should be Kyle, or maybe Guy (Guy would be good as the one on the team who pisses off the other members). The only way it could be Hal is if they totally change the character by giving him a personality.

What's wrong with his look? Both Baldwin and Jordan are fairly square-jawed and not slightly-built.

The actors' pics are not flattering or anything, but I just do not see Baldwin as a convincing Jordan/Lantern, no matter the artist influence.

Are you effin' kiddin' me? Hal Jordan is the Captain Kirk of the DC Universe. His background as a jet pilot/adventurer/risk taker is perfect for the movies. The only way Guy Gardner should ever be used is for comic relief. Also, Kyle Rayner is a freakin' rookie, compared to other GLs. John Stewart is a f*ck-up and a whiner (in the comics). More importantly, Guy and John are supporting characters. And DC doesn't even know what to do with Kyle. And don't even give me that whole Hal turned evil and killed a bunch of people thing. He was being controlled by an alien, so that doesn't count.

John Stewart always f*cked up on his own, with no influence...and then whined about it later.

I know, I know. John Stewart was the main GL for Justice League and Justice League Unlimited. And guess what? I always had a problem with that. It actually ruined the show for me. The ONLY reason (and I am just being honest here) he was the main GL in the TimmVerse was so he could be the token black character. They even changed his background from being an architect to someone with a military background, so he could appear more "bad-ass." That just never rang true for me. It was clearly a blatant attempt by the writers to be P.C. Never mind that there are other available (and much better) black characters in the DC Universe that could've been used more faithfully (Cyborg, Black Lightning, Vixen, Steel, etc.)...Hal should've come first on the cartoon. Why deviate from the comics? And why piss on Hal's legacy by presenting him as an afterthought, when he is so much more than that? Just to be P.C.? Please.

Screw the Justice League cartoon...and screw this new Justice League movie, if they go with John Stewart, instead of Hal Jordan. That would be like having Jim Rhodes as Iron Man for the movie, instead of Tony Stark. HAL JORDAN CAME FIRST. (Actually, Alan Scott did, but he has nothing to do with the Green Lantern Corps. so he doesn't count.

What?! No mention of Plastic Man yet?

Bruce Campbell often gets mentioned to play Plastic Man [and I think he'd be a great match]. But at nearly 50 [he's 49 this year] Mr. Campbell may be a bit too old to reasonably take on the role, especially if the superheroes featured in a potential JLA movie get their own movies down the line.


Plus - with Hollywood's unfortunate penchant of trying to make a movie all things to all people, Plastic Man's inclusion would be one of the few reasonable ways to bring the many forms of comedy

That'd work, although I haven't seen him in a lot of things... don't watch a lot of things he's been in. He seemed "pudgy" in Children of Men though, not literally chubby of course, just not someone I would think would be in shape enough to pull off a superhero (in fairness that could have been purely his look for that role though)... whereas Djimon Hounsou is a scuplture and has incredible regal presence.

Are you effin' kiddin' me? Hal Jordan is the Captain Kirk of the DC Universe.

Untrue. Captain Kirk, after all, was cool.

That'd work, although I haven't seen him in a lot of things... don't watch a lot of things he's been in. He seemed "pudgy" in Children of Men though, not literally chubby of course, just not someone I would think would be in shape enough to pull off a superhero (in fairness that could have been purely his look for that role though)... whereas Djimon Hounsou is a scuplture and has incredible regal presence.

His performance as "The Operative" in Serenity is enough for him to win the role.

Not to mention any time he's alongside Denzel Washington.

So long as we're there already I think Idris Elba (Stringer Bell from 'The Wire') would make a great Luke Cage.

Are you effin' kiddin' me? Hal Jordan is the Captain Kirk of the DC Universe.

Untrue. Captain Kirk, after all, was cool.

Yes, he was. And Hal Jordan is the epitome of cool. Virtually everyone in the DC Universe either looks up to him or, at least, respects him. And rightly so.