545 replies to this topic

Just finished reading the article.. here's some highlights from it:

- A new momentum system will be implemented. Itll combine the finisher meter and the dirty/clean meter.
-Hardcore & Stamina attributes have been added. Both will affect how the match plays out. Hardcore stat will determine how much damage u can cause w weapons(and maybe how u use the weapon), and Stamina will be just that... a meter that will deplete as you execute moves, and it can be recharged.
-A burried alive match has been added, and judging from the screens they had it looks pretty good.
-The CAW system, Season mode, and Voice overs have been tweaked, but they didnt go into detail about any of them.(or the roster)
-The reversal system has been changed, along with the button layout(somewhat).
-Entrances have been improved, and opponents will be at ringside during them, and react differently depending on who it is(if UT ot Kane are comming in, the waiting wrestler may be scared)


The game looks really good, and im already excited about it.

punks remained tight lipped on the only subjects I'm interested in! CAWs and online play.

So now my CAW gets to crap his pants while Undertaker comes to the ring? Awesome!

They need to reimplement the trade option from Smackdown HCTP. Not being able to trade the wrestlers around between brands really shot the replay value down a bit for me, not to mention how I wasn't able to enter all my CAWs' into season mode & play against them.

It looks class. Randy Orton looks amazing on it. On Smackdown vs Raw, the first one, he looked really nothing like him but he looks identical to him on Smackdown vs Raw 2006 which is pleasing. Also, Kurt Angle is looking more realistic and I can't wait to purcase the game.

Does it tell you the actual release date for the game (month and date)??

I didnt see one, but I assume the earliest we can expect it is October.

All they said was fall. Last year, it was either October or November.

Hopefully, unlike the last 2 years, the rosters will be closer to accurate.

I hope it was just him throwing out a random name out there, but one of the guys in the interview mentioned Scoty 2 Hotty. I think its safe to assume this was just a name that popped in his head, but you never know.

They mentioned the roster will be slightly bigger. There will be more Legends as well as more current wrestlers.

Finally, if this oNline system is good, unlike the sub standard one we have now, we can get online and face each other (finally...).

The CAW last year was a great improvement but the season mode really let it down. The one storyline you could follow throughout most of the mode, with the occasional title shot coming your way, was a disgrace.

Ok, I hope this game takes a page from SD vs Raw and LOSES the voice overs. Terrible option! All it did was limit the variability of the game and reduce the storylines in season mode. That, and add lackluster wrestler comments. They ruined what I thought would have been the best wrestling game to date.

Instead, CRAP! Here's to hoping they dump the crappy voice overs and go back to interesting and different storylines in the story mode.

Im sorry to say that isnt the case. In the interview they mentioned that they had made improvements on the voiceovers. Hopefully those improvements are VERY drastic to the point where they dont affect the gameplay, but I doubt it.

Yes! Finally! Stat tracking is also in Exhibition mode too!!

A Chokeslam from Hell into the casket!!! 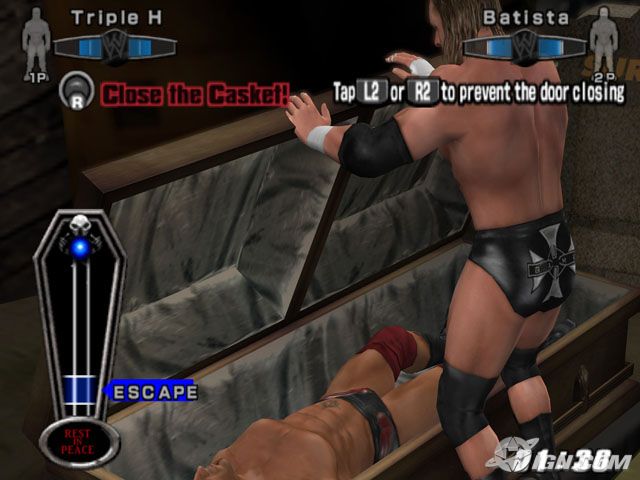 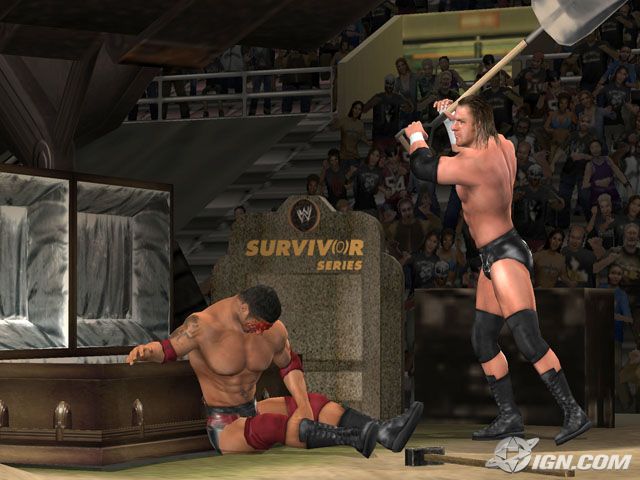 laugh The caption for the second shot:

"If Triple H tried this for real, he might have won his belt back"

Chimmel and Garcia present in the ring. Improved entrances. Winning scenes are back.

It just gets better and better.

Dude, why can't there be a decent wrestling game for the Xbox?

From the clips that it provodes so far on the sit, which superstar do you think looks the best?

I would have to go thou with Randy Orton, he looks class on Smackdown vs Raw 2006. On the first Smackdown vs Raw, he looked terrible. He only looked like himself when he turned to the side but on the new SMvR2006, he looks amazing

New moves to do in the cage are available. eg. Ramming your foot into their head to crush their face

I know this because of the nice new S v R cover that my PS2 mag has done, which means pics of divas!! Christy, Joy, Jackie and Stacy in full colour spread

Seriously though they have some great screenshots, blood dripping down from peoples faces and Taker "Darkness Pinning" Angle

Class. I can't wait for it to come out. I hope it is better than Smackdown vs. Raw because I thought it was very dissappointing

The Smackdown Games get better and better each year. While last year's took away some good things, They have realised that and have added more stuff to it. This game will be class

Back to nMo Arena Wrestling Archive