Did you see this?

Did you hear about this?

Are you wondering how I could be so far behind the times?

The first incarnation was easy to understand. You had healthy and wholesome foodstuffs that composed the base of the pyramid, and as the sides rose isosceles style towards an apex the portions shrank accordingly. 2.5 million redesign dollars later we have this: 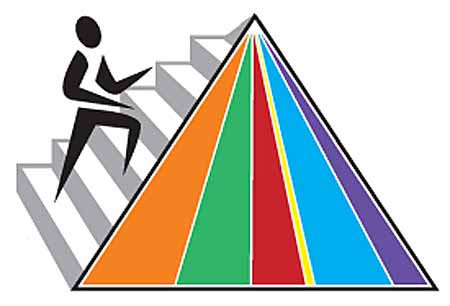 So. I have no clue as to what each of these wedges represent. Am I supposed to eat larger portions of blue foods? There aren't that many blue foods to start with. Unless blueberry pop tarts count. I can eat the hell out of blueberry pop tarts. Ignoring the labeling issues, I have to ask: why isn't this a pie chart? There is no reason for this to be in pyramid form. Obviously, concerned bureaucrats decided that dietary guidelines should in no-way-shape-or-form be associated with a dessert dish. I agree. I think. Hating to point out the flaws in something without offering solutions, I now present to you:

Brilliant. Firstly, as you can see, everything is clearly labeled, color coded, and fool proofed. I've forgone the traditional pie chart format in favor of a lovable fruit named Apple McTastyson. I envision this character being mass produced and then slung into happy meals or buried in jumbo boxes of cornflakes. Kids will eat him up. Not literally though, because: 1.) Apple McTastyson is not part of a well balanced diet, and 2.) the cheap plastic from which he is created will taste terrible. The more astute of you may have picked up on the subtle undertones of McTastyson's accessories: the eye patch, peg-leg, and marauding pistol. This is my attempt to reach out to the pirate demographic. Hundreds of years of scurvy have taught us that pirates have a nasty habit of ignoring nutrition. And showers. Among other things. The 10,000 percent increase in suggested rum imbibing is included partly because of the pirate theme and partly because I had this enormous amount of space left after putting in the other six wedges. It happens. Please feel free to print this out and mail it to your senator/congressman/delegate/mayor/councilman along with your hardy endorsement.

January 11 2010 05:10 PM
Apple McTastyson holds a special place in my pantheon of creations. And I'm not just saying that because he's holding his marauding pistol on me.